New Horizons….Day One Hundred and Nineteen

Today when we went to take our hike, there was a woman who was walking up to the park with her two dogs; the problem for me was that she was on her cell phone.  This is the third time we have encountered this woman and all three times, she was on her cell phone.  Don’t get me wrong, if I need to be on my cell phone when I am out, I will be; but for me it is more important that my dogs and the trails have my full attention.

We quickly got the dogs running into the park and huffed and puffed our way up the hill; we jumped on the orange trail and followed it completely around; whew what a workout.  The dogs did really well, at one point we could see two guys and a dog on the trail but they were some distance away, we stopped and made the dogs stop, and then I continued on towards our destination; Delilah immediately followed me, but Sampson was sorely tempted to go and greet the other dog.  Eventually he headed back onto the orange trail with us.

Then we got to the open field and there was a group of three people standing in the middle, naturally the dogs wanted to head that way and we tried to distract them, but the people were headed to our side of the field, and so it was inevitable the dogs went to greet the people.  This is something we will work on, because some people don’t like dogs (GASP!) and don’t like to encounter a dog charging at them on their walks!

Still it was a very enjoyable walk and the dogs got to check out some new places. 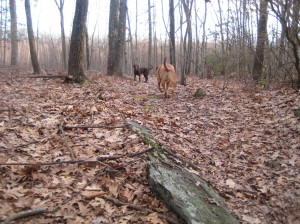