I mentioned in yesterday’s post that I would explain why I’ve been sort of absent from blogville lately.

I was in Florida for a dear friend’s son’s wedding.  I know, I can’t really believe it myself, me with my terror of flying, but I actually got on a plane and left my babies behind with their dad.

I made sure to have my flight leave later in the day, so I had the morning to take Sampson and Delilah for a nice long walk. I left last Thursday.

But never fear, just because I was gone does not mean I wasn’t thinking of my puppies and all of you.

Of course I wouldn’t be me, if I didn’t have a story (or two) to share with you.

Hubby and I met Ron and Mary many years ago through my aunt and uncle.  Of course since we got Sampson and then Delilah we haven’t really traveled that much, so it has been almost 8 years since I’ve seen them.

When we first met Ron and Mary they had a Rottie named Jessie.   The first time I met Jessie I put my hand out to pet her head and she growled at me.  Which scared the bejesus out of me.   Jessie has since passed over to the rainbow bridge, so imagine my surprise today when I was greeted by Magnum. 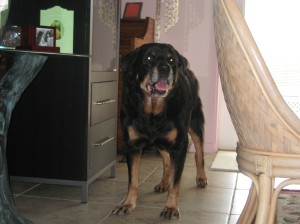 Magnum actually liked me.  Once I sat down he came over and sat his head on my lap.

Ron was on his way somewhere when he saw this Rottie on the side of the road.  Ron said to him, “I’m going to run my (insert errand here because I can’t remember it) and when I come back if you’re still here, I’ll take you home.”

Well as you know from the picture, Magnum was still there on Ron’s way home.

Ron and Mary took Magnum to the shelter/pound to see if anyone had lost a dog.  Apparently he had already escaped from the pound, but his story was he was found on a road with a collar that had “Knows German Commands” written on it.

Well you know how this story ended.  Magnum is now in a great home and loved very dearly.

There is another story of course, but it’s really long and I don’t have all the details yet….so it will have to wait for another post.

So what’s been happening in your world?  I’m going to do some blog reading in the next few days but if I’ve missed something really important, fill me in. 🙂